While most of the vestiges of the Viking Age lie in ruins or have been buried underground, a few examples of well preserved structures from the Norse occupation of Greenland still remain standing. The best example is the Hvalsey church, a stone structure complete with all four original walls that include openings for three entrances and two windows. The site of this iconic church, which rests on a sloping hillside pinched between a frighteningly steep mountainside and the stunning fjord, became our camp for five days while we photographed and filmed the restoration of the nearby hall.

A document from Iceland that tells of a wedding that took place here in 1408 is the last record of Norse presence in Greenland.

The north wall of the problematic structure had collapsed decades ago, leaving archeologists Georg and Henrik along with Jacob the restoration expert with the task of rebuilding the structure by referring to early 20th century photographs and using the original massive stones which lay strewn throughout the interior of the building. Back in Igaliku, the team has used simple hand tools and straps for the restoration of the unstable stone and lintel passageways, however this job was going to require a little more muscle.

As we cruised towards the site in a passenger boat, another boat containing a small excavator glided alongside. The excavator would become an extension of Jacob who used the mechanical arm to lift massive stones, while Henrik directed his incredibly slights movements. Witnessing the process of replacing the stones was like slow motion; it would seem as though nothing was happening until the magical moment when a stone suddenly snapped into position. I asked Jacob how the Norse quarried and moved these stones with no machinery. It wasn’t more of a problem for them than for us, “they just did it” he explained austerely, using technology that we have completely forgotten about.

Henrik and Jacob humbly admit that there are very few restoration experts working today – in fact these are the only two currently tasked with saving the Norse Greenland sites. When asked why we should bother reconstructing ruins that have been crumbling for over a thousand years, Henrik explains, “Every time a little stone or two falls, the collapse is continuing. It could take a century, but if we don’t try and stop it…” He trails off, partly because he can’t find the words to describe the loss and partly so that we can take a minute to look and appreciate what we still see today. 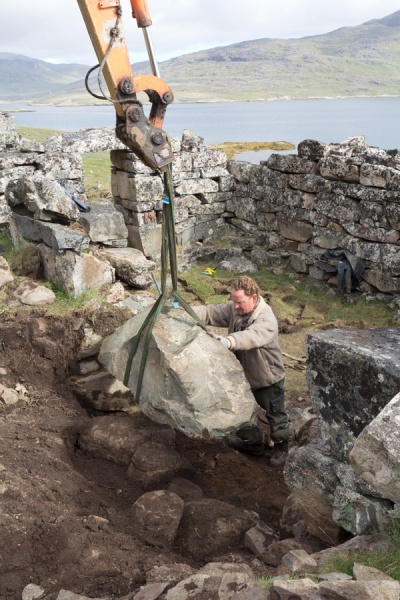 Henrik slowly guides this two-ton stone back into place

Henrik and Jacob working on the collapsed wall

When the Norse disappeared from Greenland in the 15th century, the only traces of their 400-year occupation were the ruins of their farms and settlements throughout the numerous fjords of southwest Greenland. The most legendary of these fjords, was settled by Erik the Red – Greenland’s first colonizer. For centuries after the Norse vanished their lands lay mostly untouched until another wave of colonization and settlement returned to these remote farms. As the memory of the Norse faded so did their place names – Eriksfjord became Tunulliarfik, and Erik’s farm at Brattahlid was resettled as Qassiarsuk.

I flew into Narsarsuaq, a former U.S. military airstrip called Bluie West One, which also breathes a new life as a commercial airport and operates daily in summer. It welcomes researchers and adventurers to South Greenland from around the world. Amazingly, the airport is only 5 kilometers across the fjord from Qassiarsuk (Brattahlid), making this significant Viking Age site relatively simple to visit. Before heading across the fjord I spent a couple of days in Narsarsuaq, taking the opportunity to hike to the largest non-polar ice cap in the world. While staying at the hostel I met other groups of researchers ranging from glaciologists to peregrine falcon specialists. So far it seemed that I was the only one in search of Norse sites.

Crossing Eriksfjord in a small boat took merely 10 minutes. In the perfectly bright overcast sky, I set out to begin photographing the ruins and the reconstruction of Thjodhild’s church, the first Christian chapel in Greenland, built at the time of the Norse conversion to the ‘new’ faith. It was at the replica site that I met Lars, the keeper of the keys for the reconstructed Brattahlid buildings. Lars is a typical local – he was born in Qassiarsuk and lives in the yellow house closest to the ruins.

Spending five days in Qassiarsuk afforded the time for hiking to ruin sites up in the fells (mountains) and on iceberg laden Tasiusak fjord.  Although these piles of historic stones stand impressively against the sublime Greenlandic landscape, I was more captivated by the juxtaposition of the ancient and modern architecture of Qassiarsuk.

The viking explorer surveys these ruins on icy Tasiusak fjord

I arrived in Iceland almost a week ago, eager to revisit some of the sites at Snæfellsness, a location that was especially significant during saga times. The Eyrbyggja Saga takes place here. The story begins with the settlement of the first chieftain and chronicles events that take place around the Eyr over a few generations. Why I am particularly interested in this Saga is because it is centered on a place, and not a particular character like the more popular heroic sagas. When visiting Snæfellsness, one can engage with the landscape of sagas by walking up hallowed mountains, meandering through lava fields and visiting the farmsteads of the original settlers.

I had been here two years ago when the wind and rain were dreadful enough to make it impossible to photograph with a 4”x5” view camera. This time around the weather was fair so I made my way directly to Laugarbrekka, the birthplace of Gudrid Thorbjornardottir, the heroine of the Vinland Sagas discussed in an earlier post. Located in the shadow of Snæfellsjökull, a extraordinary volcanic glacier, Laugarbrekka is steeped in mythology. Gudrid is not the only hero from the area as she lived right next door to Bárdur, the half-man, half-troll guardian of Snæfells. 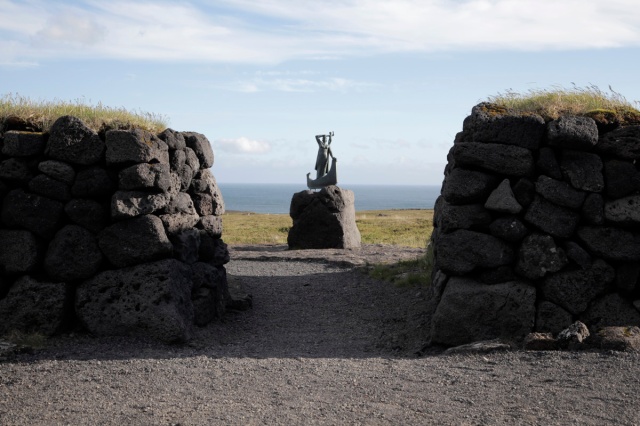 A monument of Gudrid and her son Snorri, who was born in Vinland, marks the farm at Laugarbrekka

Crossing over to the north side of the peninsula, I went to revisit the Beserkjahraun, the Berserker’s lava field also mentioned in an earlier post. Of course by the time it took to drive there, the weather had turned for the worse. Unable to photograph in the pouring rain, I explored the lava field looking for something I had missed last time, a path still visible from when saga character Killer-Styr had challenged the Berserkers to build a trail and stone fence to both link and divide the neighboring farm. After consulting with the locals and doing some scouting, I found the path and waited overnight with the hope of shooting the next day. The evening was a great opportunity to re-read the Eyrbyggja Saga on site. 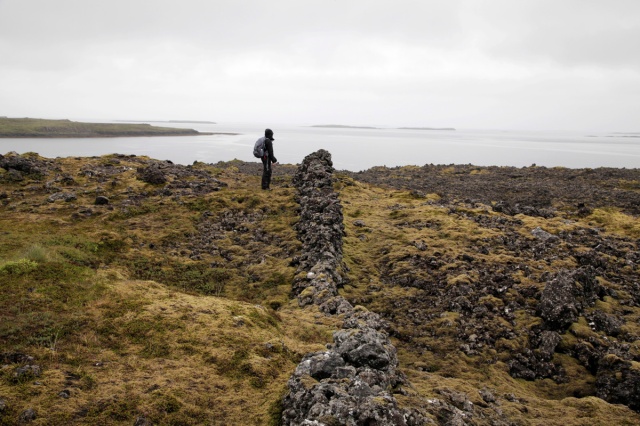 Thankfully the downpour turned into a drizzle, and in the bright overcast light, the lava field took on a dramatic look. After photographing the Berserkjagata, I did the short hike up to the ruins of a chapel at Helgafell (holy mountain) perhaps the most predominant site of the Eyrbyggja Saga. It was at the assembly near Helgafell where Erik the Red was exiled and subsequently made his journey to settle in Greenland – the next destination on my itinerary.

The chance discovery of North America, or Vinland as the Vikings called it, is the fundamental inspiration for my artistic investigation. Yet I’ve been holding off on discussing the event in detail, taking the time to study the Viking world in Scandinavia before trying to understand the significance of Norse travels to a new world. But recent news in the archeological world prompts the urgency to respond to the recent discoveries. This past week, CBC television aired a documentary on the The Nature of Things hosted by the famous Canadian environmentalist David Suzuki. The documentary titled ‘The Norse: An Arctic Mystery’ presents the research of Canadian archeologist Patricia Sutherland at a site called ‘Nanook’ on the south coast of Baffin Island. There, Sutherland has unearthed several artifacts that point to Norse origins, which leads her to believe that Baffin Island was a trading post between the Norse of Greenland and Scandinavia and the Dorset people of the Canadian Arctic, and potentially the first point of contact between the people of Europe and the Americas.

The suggestion that Norse explorers set foot on Baffin Island comes as no surprise. In the two sagas that describe the discovery of Vinland, The Saga of the Greenlanders and Eirik the Red’s Saga, references are made to places that the Viking voyagers explored. In one version of the events, a ship traveling across the North Atlantic to Greenland is blown off course and sights new land. Then subsequent expeditions to explore these lands are made by Leif Eriksson, son of the Greenland colonizer Erik the Red. As Leif travels from north to south along these uncharted coastlines, he gives names to these new lands; the northernmost he calls Helluland (stone-slab land), which is today commonly accepted as Baffin Island. The lands further south he calls Markland (forested land), probably Labrador, and finally Vinland – its location and extent are still disputed.

The Vinland map, which was believed to be from the 15th Century but now considered a forgery, shows “North America” at the top left. Perhaps the three peninsulas that make up the New World constitute Helluland, Markland or Vinland. We may never be able to come to understand the knowledge of the map-maker which is part of the beauty of this mystery. Image borrowed from the Internet.

In the CBC documentary, Suzuki opens up by stating, “The history books say that first contact between Europeans and native North Americans happened with Christopher Columbus in 1492, but what if they are wrong?” But David, let us not forget that in 1960, archeologists confirmed the grassy mounds at L’Anse aux Meadows to be the remains of a Norse settlement. Although Sutherland’s discoveries on Baffin Island may prove that first contact happened earlier than Columbus, we already know that Vikings were the first Europeans to discover North America around the year 1000. They most likely made contact with the native inhabitants but the encounters described in the sagas have not been confirmed by archeology.

Despite the science of archeology, I have always maintained that a certain amount of interpretation and imagination make up part of the practice. Could it be possible then, that Sutherland, with all of her enthusiasm, can actually will her theories to become true? As an artist, I personally find that fascinating.

But back to the story: in a scandalous turn of events, Sutherland was recently dismissed from her curatorial position at the Canadian Museum of Civilization. The reason for her dismissal is not being disclosed but reader comments on the CBC website point to politics on Arctic sovereignty. This connection would be senseless and sad indeed, at a time when we should be celebrating the cultural links between nations of the north rather than taking nationalist and corporate points of view from further south. Yet keep in mind, like all the other mysteries, my perspective is only based on speculation.

In September of last year, as the winner of a short-story writing contest, I joined an Adventure Canada expedition that sailed from the west coast of Greenland across the Davis Straight and down the coast of Labrador. In this photo you can barely make out land on the horizon. This is Baffin Island but it was most likely the place the sagas described as Helluland. Scan from a 6x7cm negative. Photo by Jessica Auer.